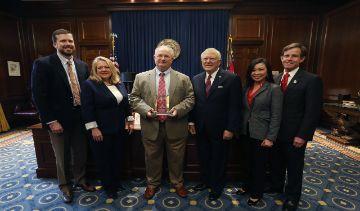 Posted at 18:50h in News Sidebar, Uncategorized by Chelsey Falb

Vice President and Regional Director, Ralph Forbes, PE was named Georgia Economic Developers Association (GEDA)’s 2018 Volunteer of the Year at a ceremony at the Georgia State Capitol on Monday, November 26th. Ralph is known as the “go to” person for communities and statewide economic agencies whenever they prepare to ​present to prospective industries. He has frequently volunteered for many projects in recent history, but has been lending his  site development and legal restriction expertise to site locations throughout Georgia since the 1980s. Ralph’s collaborative work across the state with multiple counties, cities, authorities, and utilities was recognized by Governor Nathan Deal and more than 250 economic developers from around the  attended the luncheon to honor Ralph and others!

The Joint Development Authority of Jasper, Morgan, Newton and Walton Counties also received GEDA’s Regional Deal of the Year Award for the Facebook Data Center Project, in which T&H provided engineering services​. Click through for the Savannah Morning News‘ and Savannah CEO‘s coverage of Ralph’s award.