Posted at 05:45h in News Sidebar by Chelsey Falb

Thomas & Hutton (T&H) is pleased to announce Chris Magaldi, PE as the new Regional Director for its Charleston region. Magaldi’s responsibilities will include business development and maintaining client relationships for all departments in the Charleston area, including Charleston, Berkeley, and Dorchester Counties. 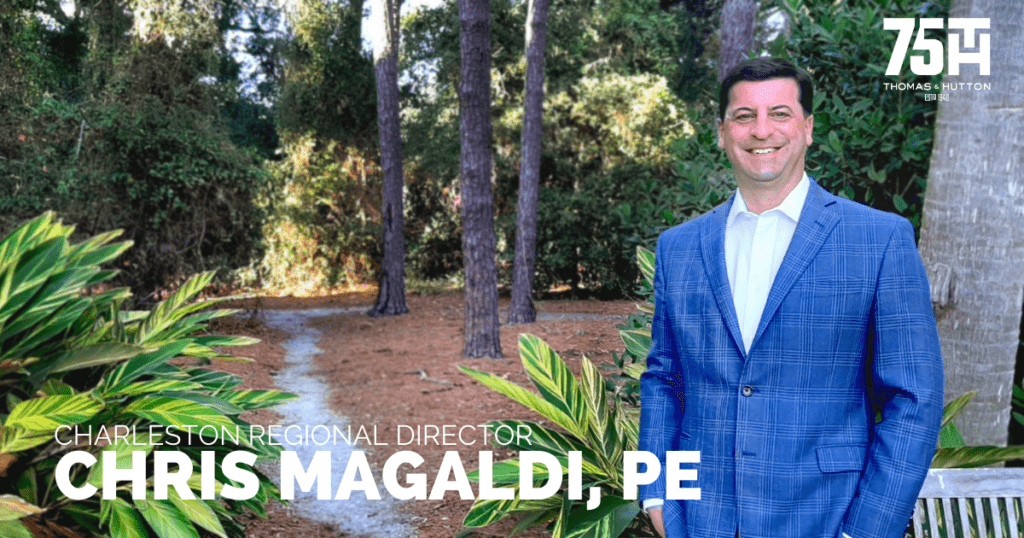 Magaldi joined T&H in 2012 as a Project Manager in the Charleston Civil Department and quickly became a Group Leader. Magaldi was named a shareholder in 2015 and has 24 years of experience in project development and design. In his decade at T&H, Magaldi has served a key role in several projects that shape the Charleston region, such as WestEdge, Summers Corner, Cainhoy, and The Ponds.

“It’s exciting to move into this new role and to continue to build on the solid foundation of my predecessors. As the Charleston market expands, Thomas & Hutton is extraordinarily well-positioned to help lead the region through thoughtful design and consulting. Thomas & Hutton is a special place. The people, culture, and quality of work are second to none. We look forward to sustaining that excellence and embrace the new opportunities ahead,” Magaldi said.

“Steve has been a key part of the Thomas & Hutton family for over seven years. In that time, our presence in the Charleston region has grown by over 70-percent. Steve is well known across the state and has been the driving force behind Thomas & Hutton’s expansion into many new and exciting markets. Chris’ knowledge of the Charleston region and our services makes him a natural choice to succeed Steve as Regional Director. T&H’s Regional Directors are outwardly focused problem solvers working on new relationships and projects, and Chris embodies that sentiment. We are enthusiastic about the future of our Charleston region with Chris at the helm,” Sam McCachern, PE, T&H President and CEO said.